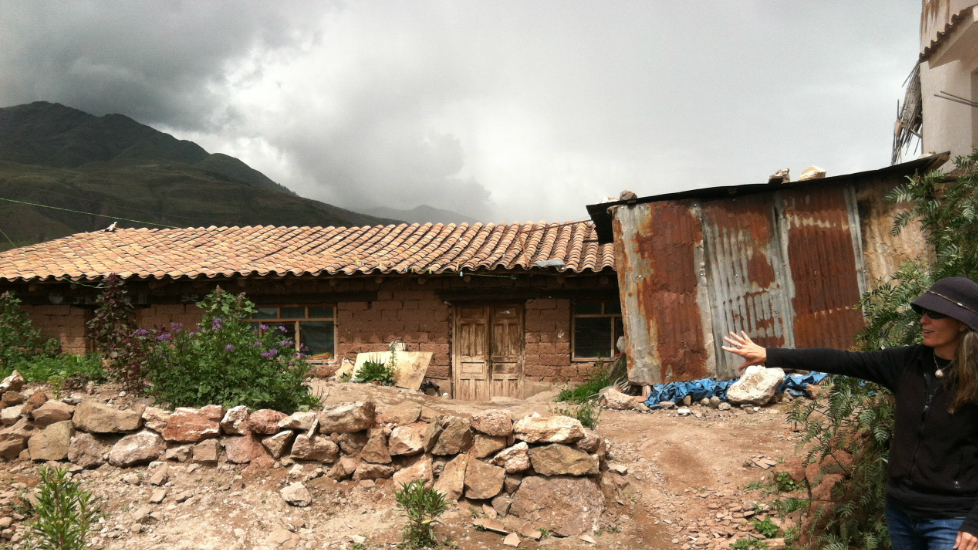 On the white lace tablecloth covering the hardwood table lay two sliced palta (avocados) and a bag of white bread. I spread the palta on bread for breakfast, and sprinkled it with salt, at my host brother Eric’s suggestion. I told him it was muy rico because it really was delicious, not because I was trying to be polite. Later that night, he told me, we’d eat “real Peruvian food.”

All five members of my host family crowded into a 6- by 10-foot kitchen to prepare the meal. I sat poised at the supper table, preparing to taste my first authentic Peruvian meal.

Four large ceramic plates arrived in front of me, and I saw that real Peruvian food meant, most accurately, potatoes. Potatoes, potatoes, and more potatoes. And rice. A small cucumber and onion salad rested in a small white bowl off to the side, and a strip of fried chicken lay across some of the rice — but these foods were barely visible next to a colossal plate entirely covered in thick papas fritas, another plate lined with baked yellow potatoes, and a third dinner plate heaped with a mound of white rice — and, of course, a side of potatoes.

I was told proudly by nearly everyone I met that Peru has 5,000 (but this number often varied) different varieties of potatoes to offer. I probably ate 20 of those over the next three months. I came to love some of them and dread the taste of others. The yuca potato, for instance, is a slightly sweeter and softer variety — that also happens to be filled with cyanide, though they’re delicious once you cook out all the toxins. The black chuño potato, on the other hand, is a small, round variety that the Peruvians of Incan descent were especially proud of, and that I particularly avoided. These potatoes were harvested early, laid out on cold mountainsides to freeze, brought back to be trampled on, laid in the hot sun, and finally put back on the mountainside to freeze again for up to five or ten years. The end product is a small, dense, gritty, cracked, pitch-black potato that tastes like Andean peasant feet.

“They’ll make you strong like the Incas,” my host family had assured me.

That first night in Peru, we ate mostly yellow potatoes they’d peeled with their fingernails — eating the skin, they told me, is bad for the stomach. And because Americans are apparently all unnaturally skinny, my host dad, Celestino, also gave me my choice of about 10 different types of corn he’d harvested last week from his chakra, a small plot of farmland. I decided to pass up the exotic purple corn for some normal-looking choclo, or white corn. We ate in silence that first night, except when they offered me seconds, and thirds, and then dessert. I discovered that dessert meant “hot tea” in Peru, which consisted of two main flavors: Manzanilla, a type of chamomile, or Canela y Clavo, cinnamon and clove.

I sipped on Canela y Clavo from a Goshen College mug that a former SST-er had given as a gift, and wondered whether my host-family could be considered wealthier than most. When the tea bags ran out, we just mixed cane sugar and hot water together for flavor. It was still called dessert.

Over the next couple weeks, I happily scarfed down french-fry soup, fried trout (eyes and all), and roasted guinea pig, each dish served with a side of potato. I learned to mix the onion salads with the rice and eat a bite of chicken in between every two potatoes. I asked for “dessert” early so I could sip it to help push the potatoes down. I noticed that potatoes last longer than almost any other food in the open air, and that the dull, starchy diet produces a person of strength and enduring grit. Learning to eat this new gritty food was my first lesson in Peruvian culture. 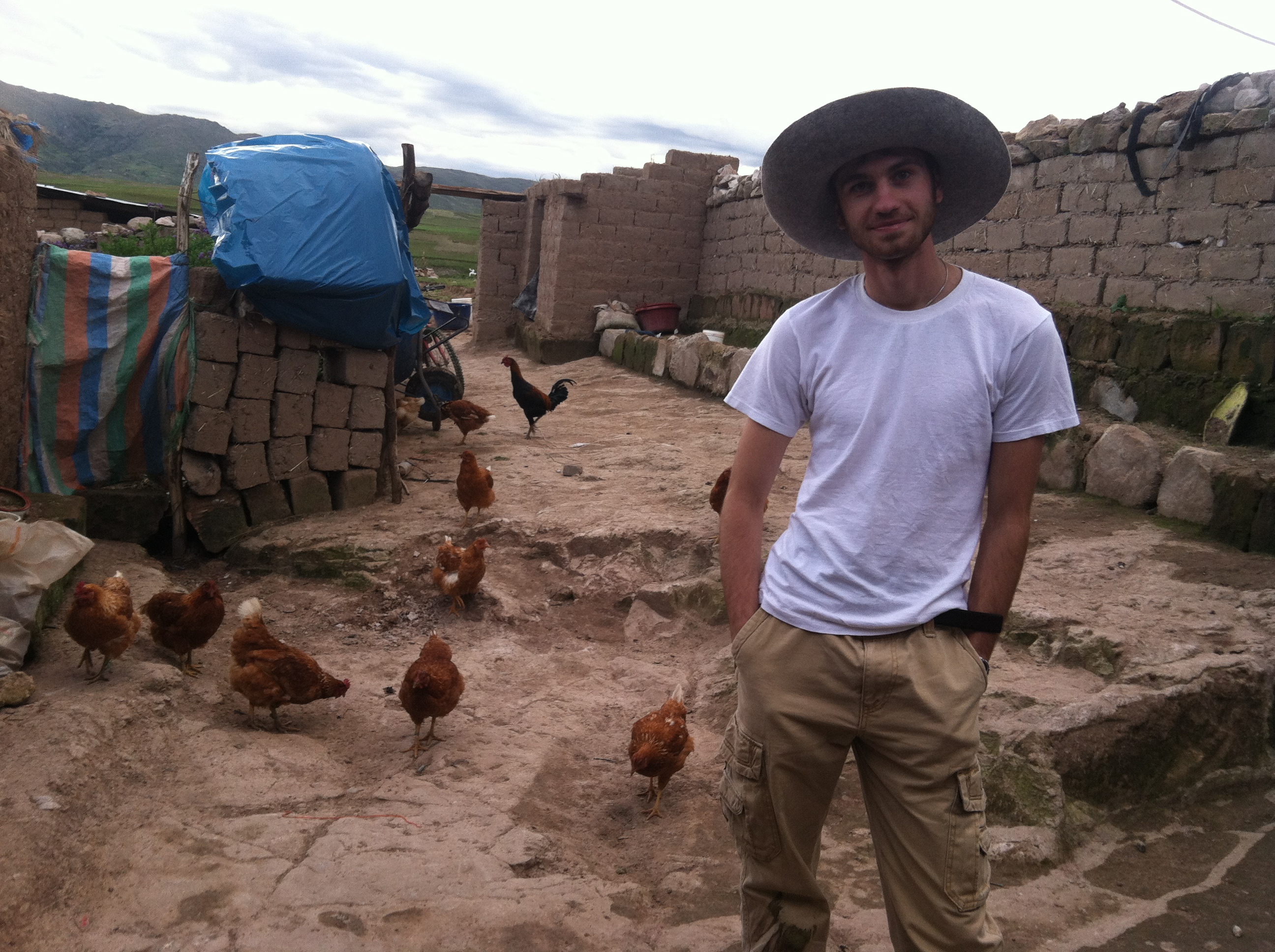 The first floor of the house had some wood panels on top of the grey cement, which was considered bien lujo (pretty fancy). Most of the wood, though, was rotted up to about the five-foot mark on every wall. When I asked about it, I didn’t get a clear answer. Celestino, unceasingly humble, shied away from telling the story which held such grand answers, and Inés, always loyal to her husband, would not tell the story if he wouldn’t. I got my answer by asking Lisi, the elder of my host sisters. Lisi constantly smiled whenever I saw her, and she was about my age, so I felt comfortable asking her, but soon Caleb and Abby, my younger host siblings, joined in the story-telling. They told me the story of the flood.

In 2010, a torrential rainfall hit southern Peru: About 67 percent more rain than normal, and it didn’t stop for two weeks. Eventually, all the southern rivers started overflowing and changing course to run straight through towns and farmland, uprooting 80 percent of all crops in southern Peru. Thousands of the world-famous Peruvian potatoes were washed from the tilled land to rot somewhere in the jungle or in newly formed ponds. Peru as a country lost about $1 million in revenue every day during that downpour from lost crops and drowned livestock.

A few days into the rainfall, the flood began to melt Andean homes. Most houses in rural Peru are made of adobe, a tough mixture of clay, mud, animal poop, and straw. The making of an adobe house is a community affair and is extremely affordable. Adobe houses require no knowledge of complex construction, just the technique learned from a neighbor or parent.

Generally, these dense and sturdy houses are no more dangerous than a cement house, but with that much water, adobe turns right back into mud. As the water level rose around these houses to meet the walls five feet up, whole neighborhoods melted and fell apart.

Over 28,000 people lost their homes during that storm. My host family had just finished building one of the first cement houses in their village of Huacarpay, so theirs was still standing. However, water levels were rising and they had nowhere to go when the nearby river’s water level rose so high that it followed a new course straight into and around their house. The river’s flooded waters rushed like brown rapids straight into the second story of their house, splitting to encompass the house entirely.

All five family members were on the roof, praying to God for any help at all, when the members of the village church appeared on the high ground. They started linking arms to make a human chain leading into the raging brown river around the house. One by one, the members of the family jumped to join the human chain and were pulled back to the high ground. Twenty people in the Cuzco area died in the flood, but the Cutipa family survived. As they would say, por la gracia de Dios.

I give just as much credit to the unwavering grit of potato-eaters — people who, above all else, have learned how to survive.

A year later, I showed up. I stayed in one of the few cement houses, ate potatoes, and heard this story as a distant tale. I started talking, started slouching, and had my first drink of alcohol with the Cutipa family. I learned that Caleb always copies his older brother Eric; that Lisi wants to be a teacher and is compassionate and loving; that Abby is a plain goofball; that Eric aspires to work in photography and art; that Celestino believes adamantly in demons which inhabit the space around us.

I loved their grit. I appreciated their kindness and their quirks. I had debates with Celestino, bro-talks with Erik, and heart-to-hearts with Lisi. But my family had housed scores of students before my arrival, and they would welcome dozens more into their home. When the bus came to take us away, I looked back and knew I was just one potato variety of 5,000.

After the flood, the residents of Huacarpay and nearby Lucre lived in donated tents for months before the government built every family a one-room cement house on the other side of the river; some migrated to the new village, many rebuilt adobe houses, and all tried to salvage possessions and remnants of their old lives; they found piles of uprooted potatoes lying under wood planks and fallen houses; they endured.

Kolton Nay is an 2015 graduate of Goshen College who majored in English writing. He participated in the spring 2013 SST program to Peru, where he lived in Huacarpay, Lima, and Ayacucho. He is now spending the summer at home with family and preparing to leave for Mennonite Voluntary Service in Manhattan in the fall.

June 10, 2015 in Essays, Peru
Our Horizons Are Exploding: Letters From Honduras